The Parable of the Pig and the Puddle

In:Salvation and the New Birth 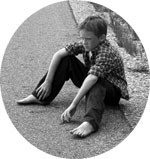 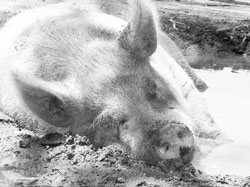 The kingdom of heaven is like unto a farmer’s son who was raising a pig for a 4-H project. Fair time was approaching fast, and Pete (the boy) was having a hard time keeping his pet clean. As all pigs are wont to do, it would instinctively investigate every mud puddle that it happened upon—even immediately after Pete had given him a good scrubbing with firm instructions to stay clean!

Pete knew that he stood no chance of winning the blue ribbon if he took a dirty pig to the show. But try as he might, he could not get his pig to keep himself clean once he had been given a thorough scrubbing. Pete’s only place to keep his pig was in a pen in which one corner stayed dry, but 90% of the pen was a mud hole—much to the pig’s great delight!

Finally, the great idea came upon Pete. He noticed that Skimps the kitty hated mud puddles! It would cost the life of his only kitty, but if only …

So he tried it. With a deft operation, Pete managed to take the soul out of the cat and put it into his pig.

How changed the pig was! He still weighed 220 pounds. He still had a snout and a curly tail. He still ate breakfast. But how he hated mud puddles with a passion!

The day of the show came, and Pete walked his pig to the fair. People stared in wonder at the boy and his pig walking down the puddle-filled road. The pig detoured or jumped over every mud puddle, with the amazing agility of a cat!

And so the pig, which had been given a thorough scrubbing some days previously, arrived at the show shining clean. What few spots he had received on the way to the show were promptly licked clean … you know, just like Skimps used to clean himself! By this means, Pete won the blue ribbon. The soul of the kitty in the body of the pig had saved the day!

This parable is by no means perfect. Yet it explains how man can avoid the “mud puddles”of fleshly delights which fill this world we live in. Not by strait jackets, but by a change of character. If we box ourselves out of society by moving to some remote island, we may avoid many temptations. But that is not true freedom. The real freedom comes from having the character of Jesus placed into our hearts by a new birth. When this happens, we will hate sin just like the pig with a kitty heart hated those mud puddles.

Have you been born again? Has the nature of God been restored in you? Although we know that Pete could never put a kitty soul into a pig, we know that God can put Christ within us, thus saving us from our sin.

Hallelujah, what a salvation!

Whereby are given unto us exceeding great and precious promises: that by these ye might be partakers of the divine nature, having escaped the corruption that is in the world through lust. 2 Pe. 1:4

Review by Andrew V. Ste. Marie   The writings of Swiss Brethren Anabaptists have been thus far underrepresented in English translation, compared to Hutterites and...

Teaching of the Lord through the Twelve Apostles to the Nations.   There are Two Ways, one of Life and one of Death, and the...

By Andrew V. Ste. Marie   In the fall, many beehives can become rather defensive and harder for beekeepers to work with. Why would this...

Rewards for a Life of Work

Why Christians Fall Short of Holiness and Devotion

By William Law   Editor’s Note: Why do so many professing Christians seem to fall short of the holiness and devotion to God which Christianity...

By Andrew V. Ste. Marie   “What if someone broke into your house with a gun?”   Those who are convinced to obey Jesus’ teachings...

In Praise of Unity

By Andrew V. Ste. Marie   Behold, how good and how pleasant it is for brethren to dwell together in unity! It is like the...

By Andrew V. Ste. Marie   The letter kills, but the Spirit gives life.   This statement is used by many to excuse their disobedience...

A Bad Prophet and a Good God: The Book of Jonah

By Andrew V. Ste. Marie   “Jonah and the whale” is often the final Old Testament story told in children’s storybooks. Beyond its use as...

Show Me Thy God

By Theophilus of Antioch   Theophilus was the sixth bishop of Antioch, the Apostle Paul’s home church. In the mid- to late-second century, he wrote...

Copyright © 2012 Sermon on the Mount Publishing