When most Protestants think of great Christian leaders, they usually don’t think of the 12 apostles. However, they were some of the greatest Christians who have ever lived. One of the things that made them great was their willingness to fade into the background and let others – like Paul – receive more glory. Meanwhile, they were quietly going about planting Christ’s church throughout the world. When most of us think of the 12 apostles, we thing of them bickering over who would be the greatest. But when the time came, that is very thing they didn’t do. The twelve worked together as a perfect team, without any rivalry among them. They had no desire to leave monuments, biographies, or accounts of their ministries.

When called upon to leave written records of their time with Jesus, they left accounts that portrayed their foolishness, but little of their wisdom. They were content to be remembered for their mistakes and failures. Because of their humble, quiet leadership, they were able to leave a strong, united Church at the time they died, instead of 12 divided, bickering groups of churches. That’s what true greatness looks like! 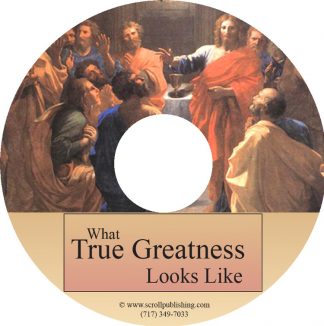 You're viewing: What True Greatness Looks Like $4.95
Add to cart