Walking in the Resurrection EPUB

This book examines the Schleitheim Confession of Faith, the oldest Anabaptist confession of faith.  Written primarily by Michael Sattler in 1527, the confession had seven articles discussing 1) baptism, 2) excommunication, 3) the Lord’s Supper, 4) separation from the world, 5) shepherds in the church, 6) the sword, and 7) the oath.  It was written to correct error which was entering the Anabaptist movement at a critical moment in history, when the original leaders were dead or far away and persecution was mounting.

This book begins by discussing the history of the Schleitheim Confession—the life of its primary author, Michael Sattler, its early printings, and the responses of the Protestant reformers Ulrich Zwingli and John Calvin to it.  The next chapter discusses the problems mentioned in the Confession’s cover letter—a loose Christianity which thinks it can do anything it pleases, despite the commands of Christ and the Apostles.  The following chapters discuss the topics covered in each article of the confession.  Find the answers to questions such as:

With a thorough Scriptural discussion of the topics, you will find Walking in the Resurrection to be a thought-provoking look at issues significant to Christian life and the church.  Each chapter also has quotes from other early Anabaptists—of Dutch Mennonite, Hutterite, Amish, and other groups—showing what they believed on each topic.  An appendix examines the doctrine of the New Birth from the Scriptures and the early Anabaptist writings.

NOTE: This is an ebook. Click here to purchase the print version.

Upon ordering, you will be sent the .epub file via e-mail. 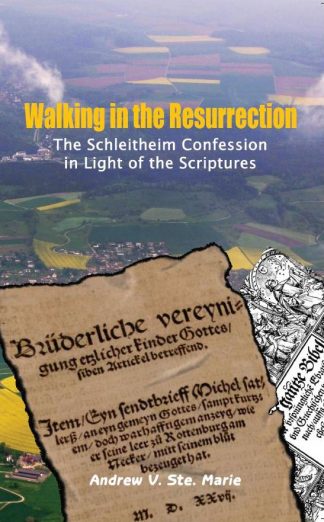 You're viewing: Walking in the Resurrection EPUB $3.99
Add to cart