The Swiss Brethren: A Story in Fragments

This study offers a new perspective on the question how the Upper German Anabaptist traditions of the 16th and 17th centuries became part of the Mennonite denominational family. In modern scholarship, it is a commonly accepted usage to apply the group name “Swiss Brethren” to early Swiss Anabaptism starting with the circle around Conrad Grebel and Felix Mantz in Zurich, who introduced the practice of believers’ baptism in January, 1525. It was not before 1538/9 that the name “Swiss Brethren” first ap­peared in the sources, but referring to a group in Moravia and southwest Germany rather than in Switzerland. Based on a detailed analysis and contextualization of 141 sources which bear evidence of the group name “Swiss Brethren,” dating from the 1530s to c. 1618, the present study suggests to abandon the commonly accepted identification of the Swiss Brethren with early Anabaptist groups on Swiss territory or with a specifically Swiss tradition within Upper German Anabaptism. Instead, the bits and pieces of in­for­mation contained in the analyzed sources adumbrate the picture of an expanding underground denomination.

Be the first to review “The Swiss Brethren: A Story in Fragments” Cancel reply 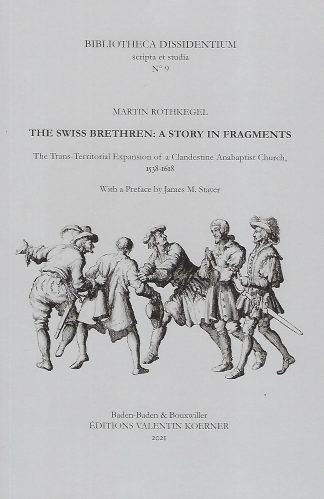 You're viewing: The Swiss Brethren: A Story in Fragments $59.99
Add to cart