The Earliest Hymns of the Ausbund

The Swiss Brethren hymnal, the Ausbund, is the oldest hymnal in continuous use in the world. The Old Order Amish of North America still regularly sing selections from the Ausbund in their worship services. The “earliest hymns” of the Ausbund, translated here, refers to a group of 53 songs that were composed and sung by Anabaptist (Philipite) prisoners in a castle dungeon in Passau during the years 1535-1537. These compositions were preserved and eventually published as a booklet entitled Etliche schone christliche Geseng [Some Beautiful Christian Songs] in 1564. Nineteen years later, in 1583, these hymns became the core of the first-known publication of the Ausbund.

This volume includes an analysis and commentary on the Passau hymns, placing them in the late medieval and South German Anabaptist contexts from which they emerged. 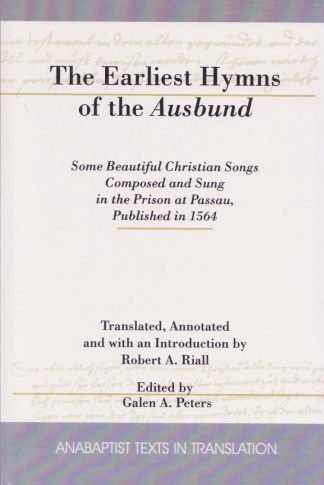 You're viewing: The Earliest Hymns of the Ausbund $34.99
Add to cart