Sixteen-year-old Patrick felt the cool tingle of the wet grass on his feet as he strolled through his father’s farm on a late spring morning. As was typical for the west coast of Britain, dense fog enveloped the hills and farm buildings.

As his sandal-covered feet sloshed through the moist green grass, Patrick squinted into the fog. For a minute he thought he saw ghostly bodies and faces. They seemed so real . . . but surely they couldn’t be. Patrick froze.

Suddenly, blood-curdling shrieks burst through the fog, followed by harsh blasts from battle horns. Figures materialized, brandishing swords and spears, heading straight for him. Patrick turned and ran as fast as he could toward his parents’ villa. Panic broke out everywhere. Women screamed. Dogs barked. Sheep bleated and ran in circles. Patrick darted toward the outer courtyard of the villa, his heart thudding.

Patrick ended up in Ireland—as a slave! But God later called him to be a missionary to these same Irish people. Would Patrick accept God’s call to bring the Gospel to the very people who had kidnapped and enslaved him?

Be the first to review “Patrick of Ireland” Cancel reply 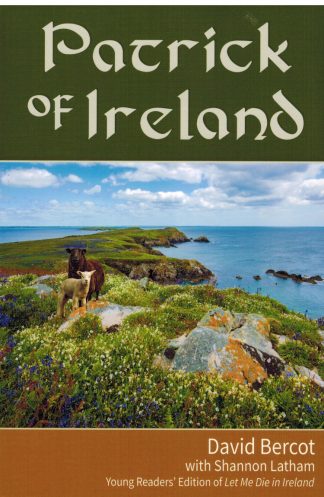 You're viewing: Patrick of Ireland $9.95
Add to cart