A Journey of Destiny

Abruptly, a menacing voice snarled, “Halt!” Before Anna could even discover where the voice came from, she saw a sword flash through the air. Michel Schenk II immediately threw his arms around his wife, Anna, and their young children. Little Michel screamed, Hans’s and Barbara’s eyes grew wide, Christian turned white, and Anna’s heart thumped wildly. There they stood, a huddled, defenseless family.

Follow the faith and footsteps of an elderly gentleman, Michel Schenk I, and his son, Michel II and his young family, as they leave Eggiwil, Canton Bern, in the Swiss Confederation.

Along with other Anabaptists from the Eggiwil area, they leave under threat of religious persecution in the year 1671. What challenges and blessings do they meet on the way to the Palatinate, in German territory?

The author has crafted a story that depicts real people—her ancestors. Their consciences, commitments, and courage propelled them to move to a land where they could follow Christ in relative freedom. This was a journey of destiny—a destiny that includes Schenk descendants as well as others who are beneficiaries of the faithfulness of early Anabaptists.

Be the first to review “A Journey of Destiny” Cancel reply 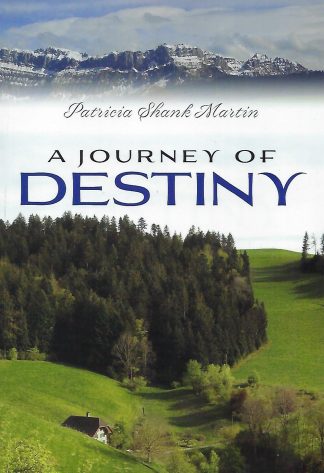 You're viewing: A Journey of Destiny $9.99
Add to cart